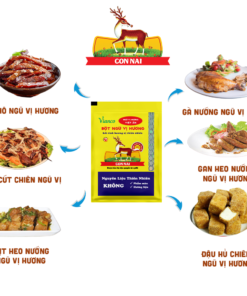 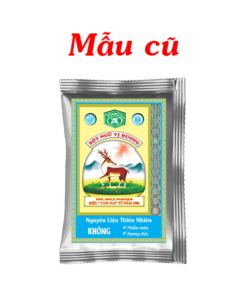 Five-spice powder and curry powder are prevalently used and processed. The habit of using these two powders is different from the cooking method, tasting of each chef, recipes, and seasoning. 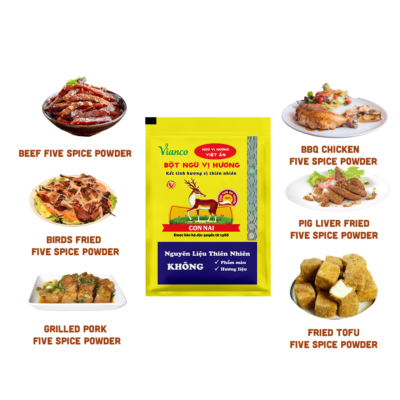 Five-Spice Powder Deer brand is a prominent brand and a special product trusted by millions of Vietnamese over the past 60 years.

The composition of this powder is not the same in each recipe. It possibly includes some plants:

Another concoction could also be used such as cinnamon, peppers (Piper Nigrum), cloves, and anise. It is used in roasting, stewing, and making curries.

Recipes of the five-flavored are based on the ancient Chinese philosophy of the balance between Yin and Yang in foods. The five-spice powder Deer brand is a great blend of Yin and Yang philosophy, with five properties embedded in Vietnamese culture. It is also an exact reflection of five emotional levels of human. Each region has a different preparation and cooking style due to the taste and local specialties.

In Hawaii, hotels store five-flavored spices in jars (right on the table of the dining rooms), for example. The proper origin of the five flavors has been forgotten in the historical timeline. The Chinese call this product is “chalky incense”. What do the five flavors include that allure many people around the world? 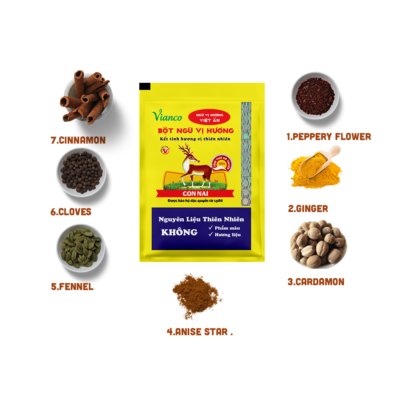 China chefs tried to find the perfect spice from the five flavors – sour, spicy, salty, sweet, and a bitter. By chance, they combined these five elements into ones and created the power of smell in this new space. Today, five-spice powder are widely spread in Guangdong and other nations in Eastern culinary culture.

The Flavor Five-Spice Powder Deer Brand also has become a reliable option for many cooks because of natural ingredients and its quality.

Five-spice powder is mostly used for processing ingredients before cooking, so we can marinate food and let the raw food absorb this powder as well as other ingredients. Because of the component in the five flavors, it is essential to use in baking foods to increase the intensity of ingredients.

Five-spice powder also helps some grilled dishes tastier such as grilled pork belly and grilled chicken. Fried foods, on the other side, five-spice flour and meat ingredients are excellent combinations to try. Remember to pay attention to the doses when marinating foods.

The basic elements of Yin and Yang, as well as five flavors, are always the remarkable criteria and characteristics in this powder. The constituent components of the dough can display this point.

For peppers, Szechuan pepper is also known as the Sichuan peppercorns – specialties of the Sichuan region in China. We call it “pepper” but Szechwan belongs to the lemon family (not spicy) with a solid taste, like camphor.

We ground the dark red outer skin of ingredients to powder after drying. Sichuan peppercorns are extremely hard to buy on the market, we may replace black peppers. Peppers provide many health benefits like warming our stomachs, alleviating pain, preventing vomiting, and stimulating digestion. 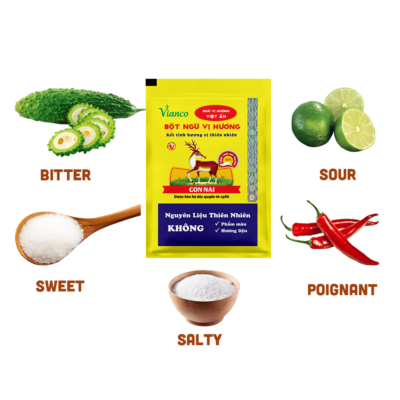 Star anise is a fruit of anise with five wings spreading out in its shape. We can collect this fruit when plants are 6 years old. This is the exact time of harvesting, but the life of the plant can last a hundred years. In other words, we ought to gather star anise throughout the plant’s life.

Pick the fruits when they are not completely ripe and dry them on the lattice-shaped plates until they turn to rust-brown color. Furthermore, anise seeds are used for other cakes, portions of bread, sweets, and beverages. These seeds might cure the throat and cough.

Clove buds are dried in 3 days to have fragrance, oil, and turning to yellowish-brown in color as well as solid in their shapes. Store these buds in the cool condition without the direct sunlight. People usually use cloves to souse fish, cakes, and drinks.

Sometimes, cloves could be used in cooking either whole or in powdered form. The only downside of cloves is that they have a strong smell, so we should utilize them very little.

Cloves may treat hiccups, cholera, and stomach pains in Oriental medicine, and other indigestion or disinfection problems, according to Western medicine.

Cinnamon is a spice taken from the bark and applied in a lot of dishes and desserts of Western and Eastern countries. In Europe, people use cinnamon in their sweet dishes while it becomes savory dishes in Asia.

In most cases, cinnamon is quite expensive and worthwhile until these days. This is because it avoids some serious diseases such as cardiovascular issues, respiratory problems, muscle and joint pains. It also enhances the immune system in a natural way.

Dill is a kind of herb that can be used with leaves, seeds, and roots to make spices in any dish. Though it comes from Mediterranean regions, dill was known to the Chinese and Indian plants many years ago. Dill is an outstanding digestive aid because it supports tonic kidneys as well as curing bloating or colic. For overweight people, consuming dill may regulate their weight over time.

In addition to the five conventional spices mentioned above, five-flavor spices could be created from other combinations. Cinnamon, peppers, cloves, anise are another popular recipe in making five-flavored spices. You even probably find chili powder and ginger added in some commercial five-spices.

The Yin-and-Yang Philosophy (five elements) has been deeply inscribed in the Vietnamese cultural tradition and the East regions. This is a philosophy of balance, harmony, and completeness. It symbolizes the idyllic agricultural personality between stability and peace. This philosophy also brings to the Vietnamese cuisines – creating richness, preferring the harmony of tastes, and feeling comfortable in a particular taste.

Ancestors believe that five elements twist, twine, and transform together. This is the reason for making the universe movement and human beings. Therefore, if the five elements are balanced, the product can make our body healthier and we probably live longer with enriched organs.

For Vietnamese, a delicious dish needs to concentrate on the Yin and Yang balance, so spices must be seasoned to compensate and stabilize each other. Ancient people believe that all illnesses are caused by an imbalance of this philosophy.

Food is a category of medicine; helping and curing our body heal. Therefore, the five spices are the most popular in traditional cuisines with spices as a valuable medicine. When combined, they always follow the average principle.

In India, the five spices are known as salty, sweet, sour, spicy, and bitter. In Japan, the five elements are described as Shichimi and Togarashi with seven flavors, including Sichuan peppercorns, anise, cinnamon, cloves, and dills.

“Curry powder and five-spice powder are the same?” This question is usually caused by confusion among many people in the flavoring ingredients that make these two mixed powders. 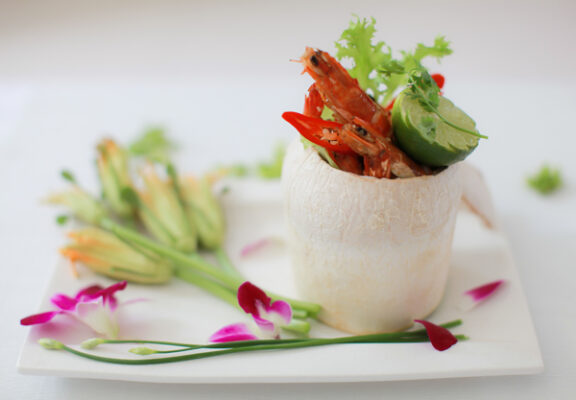 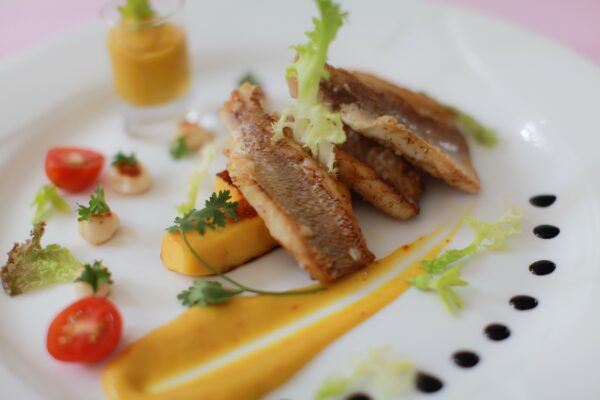